The Plastic Free Salish Sea campaign brings organizations, business, and individuals together to change the culture of plastic use across the Puget Sound area. They provide educational and practical resources through their website, Plastic Free Living toolkits, and community events.

The Snohomish County MRC recognizes this as a major issue of concern and is taking steps to address this problem within Snohomish County. One way is through our quarterly beach clean ups with WSU Beach Watchers.  Each year at least one of these clean ups utilizes the Escaped Trash Assessment Protocol (ETAP).

The Escaped Trash Assessment Protocol was developed by the Environmental Protection Agency (EPA) to standardize the site selection, collection, and cataloging of trash during clean ups. This easy to use process creates reliable data and gives communities a better understanding of the extent and type of litter in their area. With this knowledge community members are able to better reduce and address these escaped trash sources.

What is escaped trash?

According to the EPA, escaped trash refers to "all types of mismanaged man-made materials that have been directly or indirectly, intentionally or unintentionally, disposed of or abandoned into the environment – this includes litter and floatable debris."

Why is escaped trash an issue?

Trash that is not contained within local waste management systems can end up in our waterways including lakes, rivers, wetlands, and marine systems. Trash often makes it's way to these areas via wind and stormwater resulting in degradation of habitat, physical and toxicological threats to both aquatic and terrestrial species (including humans!), and reduced aesthetic and recreational values of these areas. According to Keep America Beautiful, the U.S. spends over $11 billion in cleaning up litter each year.

A 2022 study from researchers at the University of Washington and the National Oceanic and Atmospheric Administration, found that plastics made up almost half of all trash collected on beaches in the Puget Sound since 2017. The other forms of trash were heavier materials such as glass, cement, or metal. Due to the nondegraded state of the collected trash, the researchers suggest that the majority comes from nearby areas (Willis et al. 2022).

What can be done to prevent escaped trash?

On an individual level:

Trash needs to be put in its proper place and it needs to stay there!

Trash that is easily blown away or that is buoyant is the most likely to escape. Beach goers and boaters need to be sure that they do not leave anything behind or let it blow away. Even far from the beach everyone must make sure that trash left out for collection is secure in bags and bins with lids.

On a regulation level:

Escaped trash needs to be named as a pollutant!

The National Pollutant Discharge Elimination System (NPDES) Permit Program, authorized by the Clean Water Act, regulates point sources of water pollution. Point sources are any discernible, confined, and discrete conveyances such as ditches, pipes, or vessels. Currently, the types of pollutants named under this program include sediments, nutrients, bacteria, heavy metals, toxic chemicals, heat, discarded equipment, etc. But general trash pollution is not named as a pollutant. Since the majority of escaped trash travels through the stormwater system, it is important that it be named as a pollutant under the NPDES Permit Program. 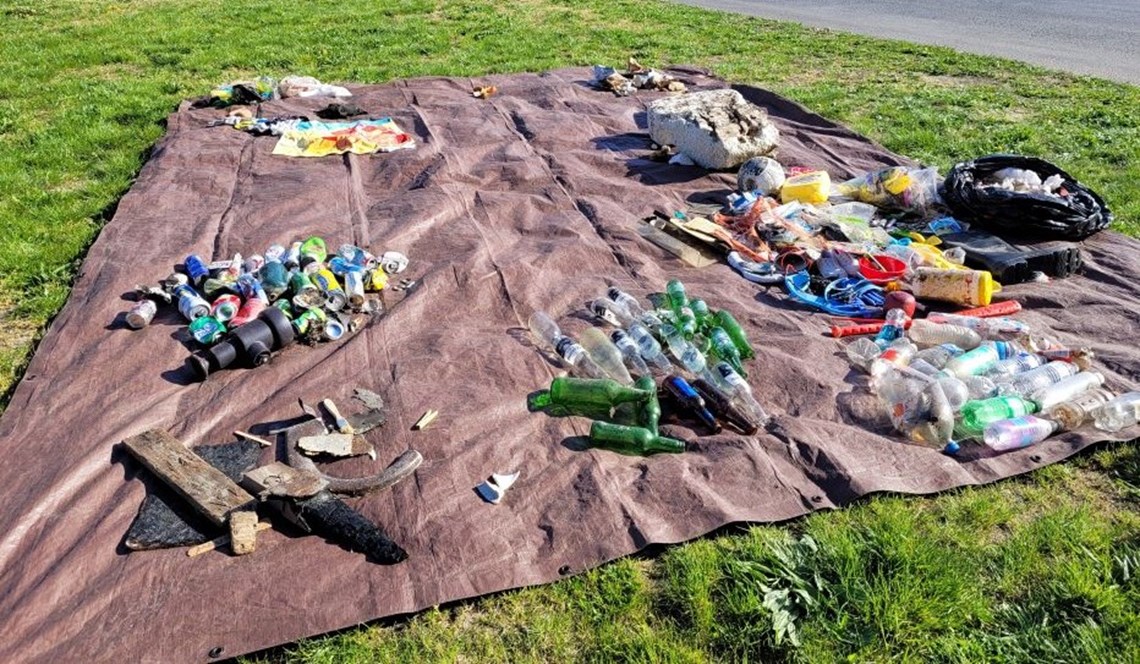 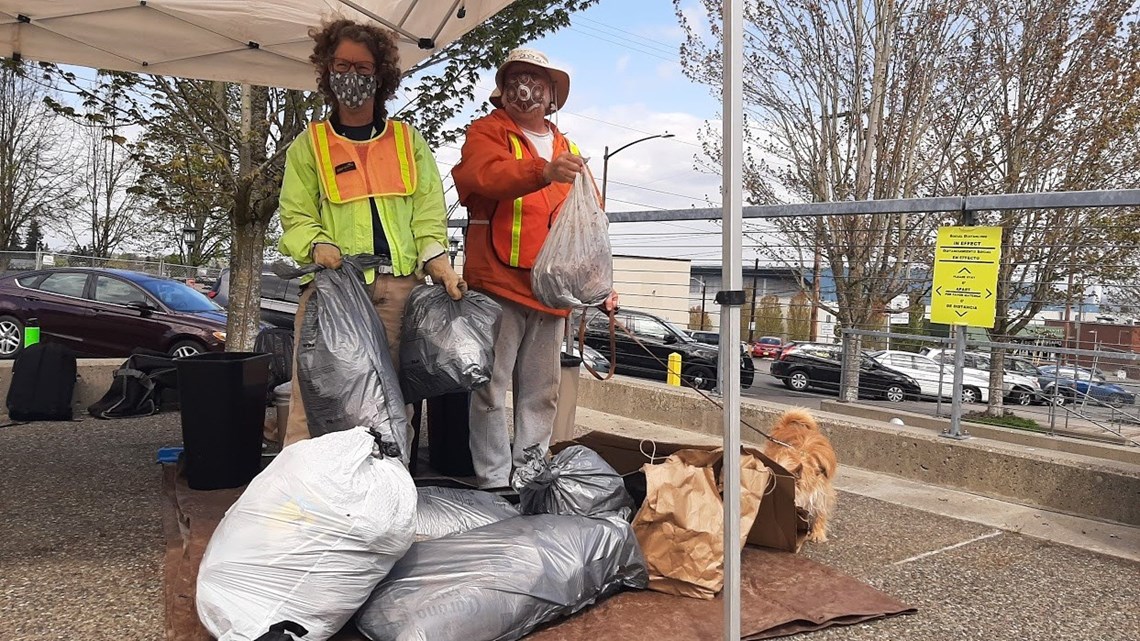 Snohomish County MRC partners with WSU Beach Watchers to host quarterly beach clean up events. Each year at least one of these beach clean up events utilizes the Escaped Trash Assessment Protocol to gain a greater understanding of the types of escaped trash on our marine shorelines.

Want to get involved? See the next scheduled beach clean up on our Meetings & Events Calendar!

Volunteers gathered over 57 pounds of escaped trash that was categorized and recorded! Out of the items collected 98% was garbage, 1% was recyclable, and 1% was compostable.

The collected materials were were made of majority plastic (51%). Bottle caps, food wrappers, grocery bags, and durable plastic food containers made up the majority of the escaped trash.

Data is currently being analyzed and will be posted soon! 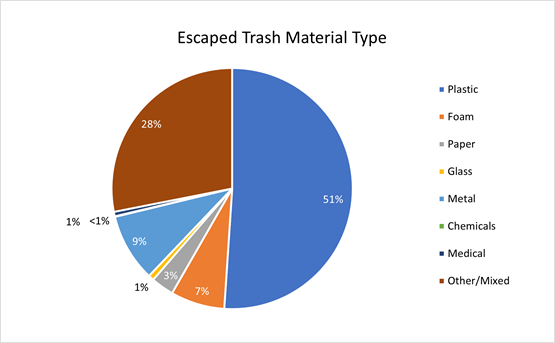 You don't have to wait until the next event to get involved and make an impact on the health of our shorelines!

See the map below for suggested shoreline cleanup locations that you can visit year-round!

Note: Locations shown on the map with a yellow icon require paid parking. 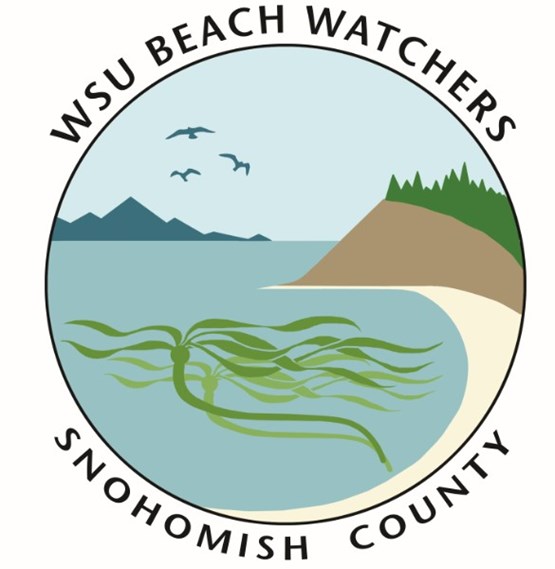 Special thanks to our event partners with WSU Snohomish Beach Watchers & Waste Warriors!