Ocean acidification is the decrease in the pH of the ocean and the subsequent changes in seawater
chemistry that are caused by the oceans absorbing increasing amounts of carbon dioxide.

On May 14, 2014, the Snohomish County MRC co-hosted a forum on ocean health with the Northwest Straits Commission and the City of Everett. The event was moderated by Snohomish County Council Chair Dave Somers. Snohomish MRC Vice-Chair Franchesca Perez opened the evening with an IGNITE talk for presenters Dr. Terrie Klinger, Simon Geerlofs, and Betsy Peabody. The forum focused on developing an understanding of the global issues of ocean acidification and sea level rise and what is being done to address them locally. Video footage of the available presentations can be viewed by clicking on the links below.

The Process of Ocean Acidification

When carbon dioxide (CO2) is released into the atmosphere, primarily through the burning of fossil fuels, about 25% of these emissions are absorbed by the ocean. The CO2 reacts with the elements dissolved in seawater to form carbonic acid, which lowers the pH of seawater. Since the Industrial Revolution, the oceans' pH has decreased by 0.1 units, which is equivalent to a 26-30% increase in the oceans’ acidity.

Increasing levels of carbonic acid, a corrosive compound, dissolve or inhibit the growth of marine organisms called calcifiers whose shells and skeletons are composed of calcium carbonate (CaCO3). Vulnerable organisms include oysters, clams, mussels, abalone, crabs, corals, and animals at the base of the marine food web such as zooplankton and pteropods. 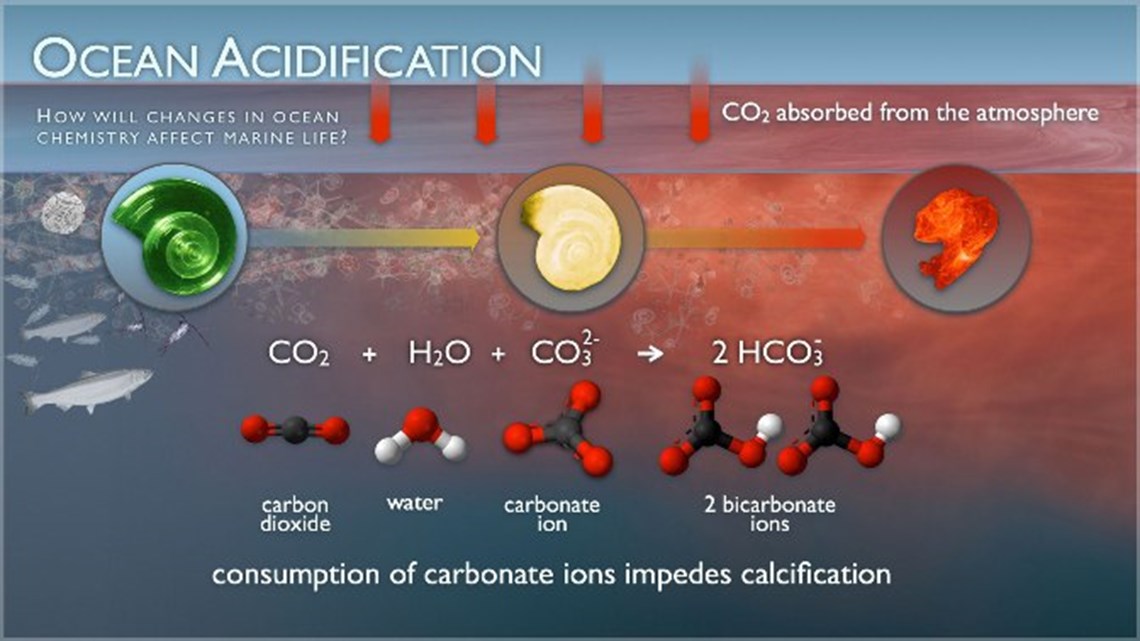 Marine ecosystems are already being impacted, especially in the Pacific Northwest. The coastal upwelling on the Washington coast brings cold, nutrient-rich waters from the deep ocean to the surface. This nutrient-rich water is also rich in carbon dioxide and low in pH, exacerbating the effects of ocean acidification in the Pacific Northwest. Since 2005, the effects of ocean acidification have been observed in Washington, although they were not initially identified as such. Shellfish farmers have experienced decreases in shellfish size, abnormal growth patterns and mortality rates of up to 80% in shellfish larva.

When exposed to a pH of 7.5, a common hardshell clam from the East Coast cannot survive. The first day of exposure, the larvae are healthy (A). On day 2, the shells are visibly dissolving (B). By day 3, the larvae are almost dead or dead (C).

Ocean Acidification In The News