The goal of the Nearshore Restoration Project was to improve nearshore habitat at four locations along a 4.5 mile stretch of the railroad impounded shoreline of Puget Sound between Mukilteo and Everett. This included a restoration project at Howarth Park, and beach nourishment at three sites at the outlets of Powdermill Gulch, Narbeck and Glenwood Creeks. Dredge material from the Snohomish River was placed at these key beach nourishment sites allowing the drift cell to naturally distribute sediment along the shoreline.

The Howarth Park Beach Restoration Project included removing the bulkhead on the beach, as well as restoring and regrading the beach to restore habitat. This provides the public with more usable beach area at high tide. Native vegetation has been planted at the foot of the stairway, and additional sediment was placed to regrade the beach to a more natural shoreline profile. 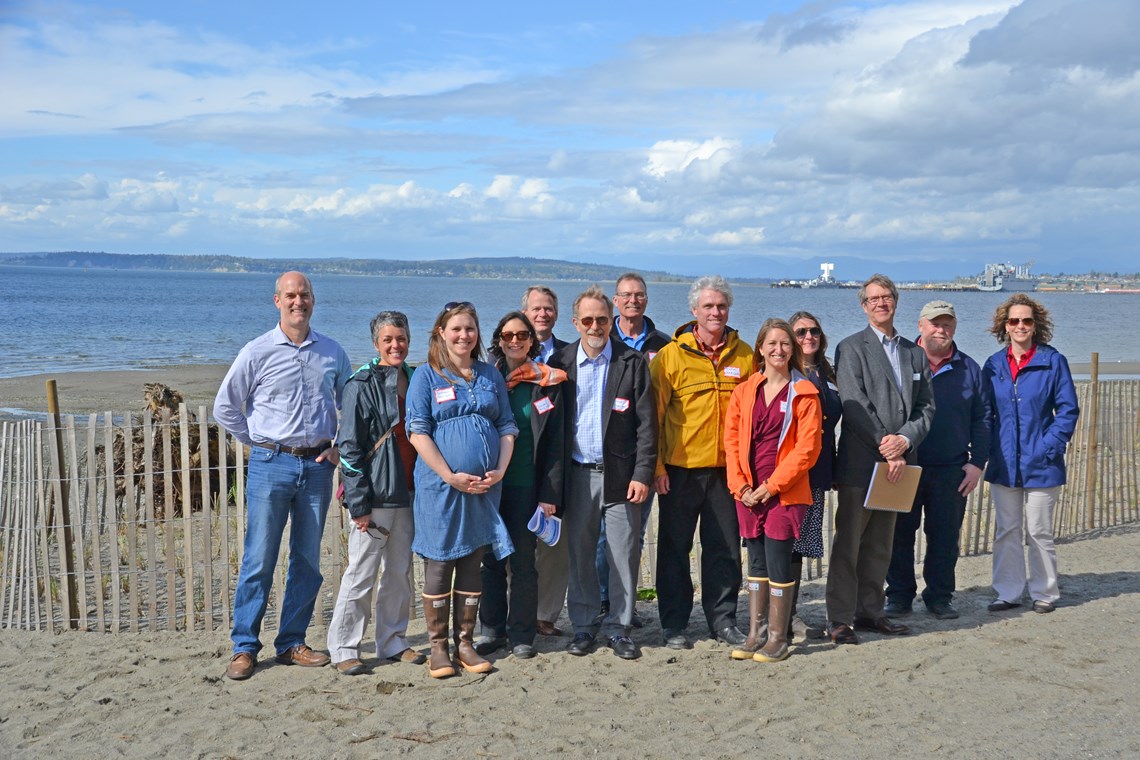 Shoreline railroad construction, beginning in the early 1800s, has disrupted natural beach and habitat forming processes, resulting in degraded shorelines and beaches. Extensive loss of mid-upper-beach habitat and a shift in the sediment composition of remaining beach areas have impacted both salmon and forage fish habitat. Forage fish need sand and gravel to spawn, and juvenile salmon rely on shallow water areas to avoid predators. The disconnection of riparian areas from the beach and shallow marine waters degrades nearshore food-webs. Consequently, these changes also reduce the food source for orcas, seals, birds, and other marine organisms.

The Nearshore Beach Restoration Project was developed by Snohomish County and its partners to support the Snohomish River Basin Salmon Conservation Plan and the federal listing of the Puget Sound Chinook Salmon as a threatened species under the Endangered Species Act. The nearshore environment of the Snohomish River Basin (WRIA 7) has been identified as a high priority for restoration of juvenile salmon and forage fish rearing habitat. 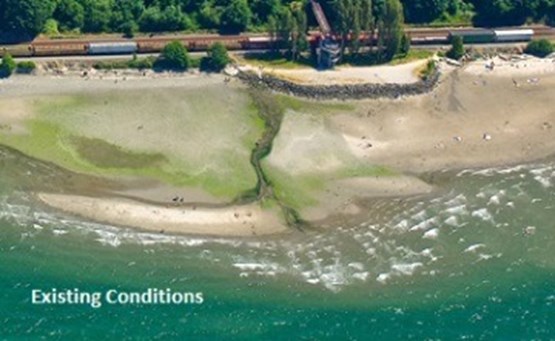 Hard armoring is visible at Howarth Park, which was removed for restoration in 2016.

The Nearshore Beach Restoration Project began in 2011 with three stakeholder meetings to identify priorities for restoration of the nearshore to improve both salmon and forage fish habitat.  A technical assessment was used to evaluate the physical characteristics and biological potential of proposed sites. The conclusion of this stakeholder process generated a list of site and restoration treatment recommendations, which included restoration at Howarth Park and the three eventual beach nourishment sites.

An informational public meeting was held on April 24th, 2014 and 43 local residents attended to learn about the project. MRC members and staff provided an overview of the project and were joined by Dave Lucas, the Snohomish County project engineer, to answer questions from the public. Attendees were supportive of the project and wanted to stay informed on progress and volunteer opportunities.

Project partners include Snohomish County Surface Water Management, the City of Everett, the Port of Everett, the US Environmental Protection Agency, US Army Corps of Engineers, the US Fish and Wildlife Service, the Washington State Recreation and Conservation Office Salmon Recovery Funding Board, and the Puget Sound Partnership.

Monitoring prior to construction is critical to understanding the effectiveness of this type of project. The MRC recognized this early on, and began collecting baseline data in 2011. Data collected included forage fish samples, sediment size analysis, and beach topography.

Construction of the project was completed in 2016.

Sand that was originally dredged from the Snohomish River was placed at the beach nourishment locations. The sand was transported from a nearby location by barge to the nourishment locations using tugs. Some of the sand was placed at Howarth Park and graded using construction equipment to create a naturally sloped beach area. In total, over 18,000 cubic yards of fine dredge material was placed. See a time-lapse video of the construction below.

The MRC worked with Snohomish County Surface Water Management, University of Washington staff, and Washington Department of Fish and Wildlife staff to apply for funding for an in-depth study to assess the effectiveness of the project after it was complete. The team was awarded a grant from the Estuary Recovery Restoration Program to collect data and prepare a report on their findings.

This project used the beach nourishment locations along the Everett shoreline as the centerpiece of the monitoring effort to assess the functional efficacy of nourishment and other treatments. Detailed beach monitoring was conducted both within the beach nourishment region and south of the region, where no nourishment has occurred. In each region, four armored sites along the railroad and four reference sites with more natural shoreforms and vegetated beach characteristics in front of the railroad have been studied. Changes over time at the non-nourished sites have been compared to changes within the nourished regions to help evaluate the short- and long-term effects of sediment addition on numerous shoreline functional responses.

Transect-based surveys and photographs were used to collect data on:

The full study and conclusions of the project are summarized in a final report (Dethier et al. 2020). Overall, the study found that sediment nourishment along the BNSF railroad can improve some structural and functional aspects of shorelines, but these improvements are unlikely to persist for longer than a few years if they are limited in scale or solely rely on re-use of finer, clean dredged material. Longer term monitoring may be needed to adequately assess these situations, likely along with continued experimental nourishment interventions and maintenance. The project team presented their findings in a webinar on November 9th, 2020, and a recording can be found here.

*Disclaimer: This web page was developed under Assistant Agreement No. (TBD) awarded by the U.S. Environmental Protection Agency.  It has not been formally reviewed by EPA.  The views expressed are solely those of the Snohomish County MRC and EPA does not endorse any products or commercial services mentioned.